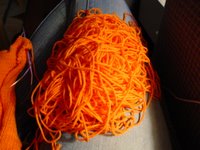 I spent way too long rewinding this mess so that I could continue to knit on the back of the inside out sweater. 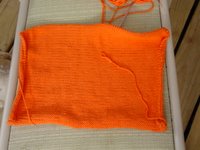 I've made a few more inches progress than this picture shows - I'm past the armhole shaping, about 4 inches more to the top. I'm LOVING the cotton ease! I knit with it a bit last year when I tried Tempting (and ripped it out), but haven't touched my stash of it since then (hey, it's discontinued - I have to save it for the perfect project!). Yum. All I want to do is knit this sweater. And I'm loving the orange - such a cheery color!

I also (in a moment of miracles) finished the first P-word sock! Woo Hoo! 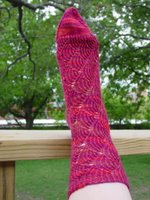 Do you think my pal would be offended if she only got one sock in the mail? Matching is so overrated after all....But no, in good sport behavior, I cast on for the second sock the same day (Tuesday) and started knitting. I was halfway through the first repeat on the leg of the sock last night when I realized I was knitting from the foot chart instead of the leg chart. I guess I was so used to looking at that chart since I had just finished using it...crap. It is all ripped out now, looking at me from across the room waiting to be re-cast-on today.

I really really really really want this to be done, as I'm taking off next Friday (the day after standardized testing - do they really need to be tutored? No), (and don't get me started on how we're not supposed to have school tomorrow, but due to an "ice" day back in December we have school now. It wasn't even real ice - total rip-off) and I'd like to have it done so I can KNIT FOR ME all next weekend. Yum.

Plus, I have an international pal (I don't think that's giving too much away!), so I need to mail them early anyway. I have all the other contents of the package ready to go, just waiting on that other damn sock! It's a good thing I love the pattern, or I really would be in trouble.

My goal of "nothing but sock" for the next week will be constrained though, as The Husband is off work Saturday (both good and bad - nice to have him around, but means I won't get much done), and we have a yarn-dyeing party planned for ourselves. He's doing his research (he's very excited about the possibilities - maybe he'll make us a warping board!), and gathering supplies. We've had the yarn in the stash since early last year (one of my first purchaes from Knitpicks), and the Kool-aid for a few months. I have a feeling I'll be ordering more yarn to dye when we're done!

We may also do some yard work - the deck needs to be sealed and I want to get something to cover up the spots where grass won't grow so we don't have a mudfest every time it rains - nice but will drastically cut into knitting time!

I have a few other projects on the horizon (and on the sewing table), but I'll save them for later. Off to re-cast-on for the second sock!
Posted by Jenn at 1:12 PM