H is for Hand-dyed

So the hubby and I had a Great Kool-Aid Adventure this weekend.

We first attempted to wind the yarn around the chairs to create a self-striping effect, but the hubster is a little unclear on the need to keep your hand in the center of the hank to keep the yarn from getting tangled. You can see where I'm going with this, right?

So the second hank came out to play, and we (he) decided to play it simple this time.
I wanted pink and green, so we pulled out Lemon-Lime and Cherry and tested it on some leftover Paton's Classic Merino in Natural. We ended up with four packets of Lemon-Lime and 1 1/2 of Cherry. 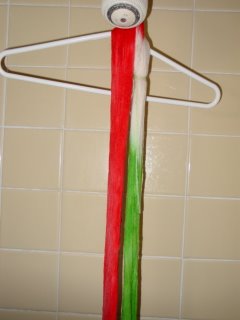 Hanging out to dry. 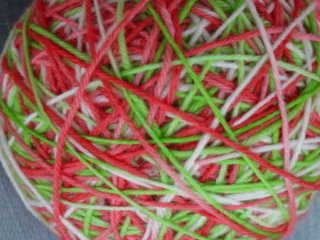 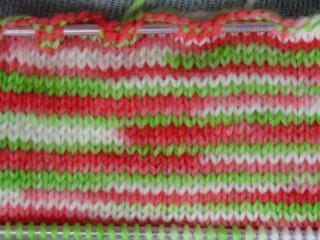 While The Husband was winding this into a ball for me, he mentioned (more than once) "Why haven't I bought you one of those wind-y thinges yet?" Gee honey, I don't know!

I enjoyed doing this, but I think I want more of a "challenge" next time - actually figuring out the striping and all that. Of course, I'll have an opportunity coming up soon - go sign up for Scout's Dye-o-Rama! We did pick up several *ahem* packets of kool-aid at the store last week. Now if my Knitpicks order would just get here already!

H is also for Hats, which I seem to have an obsession with making.
Posted by Jenn at 6:01 PM