I'm a bit behind on this meme - but I had to clean my house first, and we all know how long that can take!

I also was hoping to reorganize my space, and I finally had the chance yesterday. Those white drawers used to be in The Girl's closet, but we gave her our old dresser and I took these. I was looking for something to keep the yarn "shut up" in, so that Miles couldn't eat it (we're hoping to try keeping him out of his kennel a bit at a time and I don't want the knitting to be the victim!), and these fit the bill perfectly!

I have potential projects, extra yarn for current WIP's, and things that are "on hold" in the bottom drawer: 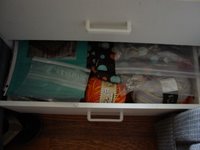 And current projects in the top drawer: 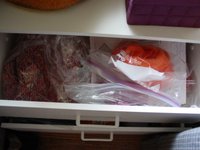 The Suki bag on top is holding Chrysalis (it's pretty bulky, so this works just great for it), and the purple box has all my notions and some spare dpn's inside. My stash of charity yarn is under the end table.

I really like the organization and hope I can keep it clean and neat!


We also rearranged our living room furniture in January after we took the Christmas tree down, and I found some gifts under the couch! 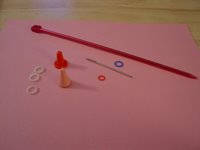 One of the pair of my first knitting needles (that I thought somehow I had thrown away), some point protectors, a yarn needle and a few stitch markers. So nice to have these back again!

I sent off my Pirate package on Friday, and my booty swapper got it yesterday! Go see all of her booty!

Thanks for all of your sweet comments about my stash - if it wasn't "Use what you have" month I'd take Margene's advice and grow it!

The Horned Frog (actually a lizard) has been TCU's mascot longer than TCU has been the university's name. Four students helped make the decision in 1897, when AddRan Christian University (renamed TCU in 1902) was located in Waco. Here are some other facts about the horned frog, one of the country's most distinctive mascots:

Their primary diet is red harvester ants; they'd like 80 to 100 a day. Unfortunately, red ants are falling victim to insecticides and to more aggressive fire ants in much of Texas.

The typical Horned Frog is three to five inches long.


Horned Frogs are cold-blooded animals and have an unusual pineal gland, resembling a "third eye" on the top of the head, which zoologists believe is part of their system of thermoregulation.

When angered or frightened, horned frogs can squirt a fine,
four-foot stream of blood from their eyes.

The Horned Frog was named the State Reptile of Texas in 1992.

In stories of Native Americans in the Southwest, horned frogs are depicted as ancient, powerful and respected. Archaeologists find horned frogs on petroglyphs, pottery and other crafts painted hundreds of years before Columbus set sail for America. In some parts of Mexico, folklore persists that these creatures which weep tears of blood are sacred.

I forgot to tell you yesterday that I got to meet a cutie this weekend - Noel!. It was great to finally meet the little guy (oh and to see his mom and dad too!). You can see pictures of the goodies he got here. So fun!

OK, so seriously, that knitting content? Coming tomorrow. And for those of you still in the contest (not many of you now!) the bag is still on the chair. Still. Starting to bug me, but I swear I'm not touching it!
Posted by Jenn at 1:22 PM