A Tale of Two Sweaters

Two FOs for the price of one day! 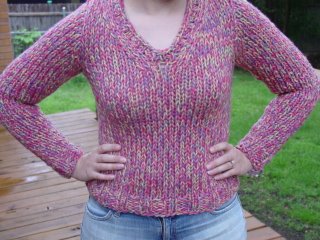 Pattern: V-Neck Sweater from The Yarn Girl's Guide to Beyond the Basics
Yarn: Classic Elite Marl La - a smidge over 7 skeins
Needles: Sz 15 Clover Bamboo Circ for ribbing, Sz 17 Bryspun Circ for stockinette.
Dates: Started in March, finished Friday Apri 28.
Mods: I did add a bit of length to avoid stomach-stick-outtage.
Thoughts: Is it just me or do my boobs look huge? I love the colors in the yarn. The pattern was simple, but I'm not sure how easy it would be for a beginner - where the increases/decreases were it just said to increase 1 stitch - no specifications for what kind of increase. I like all those knitpicky details spelled out for me! I really like the v-neck, the sweater is a bit bulky, but I think I'll wear it a lot on days when I'd rather not drag around a coat. It was also my first experience with split splice joins. I did these to drag that yardage out as far as I could! It was a bit of a pain in the ass, as each join had four seperate pieces of yarn to be spliced and spit-upon, but I think it worked out great, especially as I had hardly any ends to weave in! Best part? Seaming bulky yarn goes REALLY fast! 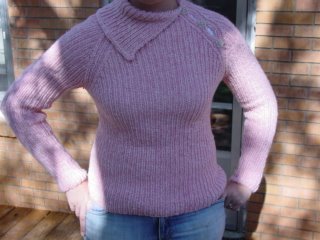 Pattern: Chrysalis Pullover from Fall 02 Interweave Knits
Yarn: JoAnn Sensations Dolcetto 6 1/2 skeins.
Needles: Clover Bamboo Sz 10 Circular and DPNs
Buttons: Basketweave buttons by JHB International, from JoAnns.
Dates: March '06 - Saturday April 29.
Mods: My gauge was off, so I did the dreaded maths and determined that I could cast on for a larger size and still get the size I wanted. Love the maths! I also knit the collar several rows longer than called for in the pattern. I only had three buttonholes, not the four the pattern said I would have (and by said I mean it told you in the materials section to buy four buttons - the pattern said to knit a buttonhole every 12 rows until you were through the decrease section - this only gave me three buttonholes, but I don't think this is a big deal).
Thoughts: I love this yarn. It is very very soft (though it has a tendency to pill already). It feels like a nice comfy sweatshirt. I was REALLY sick of K1P1 by the time I got to the sleeves though, so progress slowed considerably. However, my favorite feature of the sweater is that it is knit in the round until you get to the arms, you knit the sleeves and then join the sleeves to the body to continue knitting up the yoke. Love this! Absolutely NO SEAMING. I does pull apart a bit around the buttons, but I almost always wear a t-shirt under my sweaters (in case I get hot), so I'm not concerned about showing any skin! I can see this being my go-to comfy sweater. 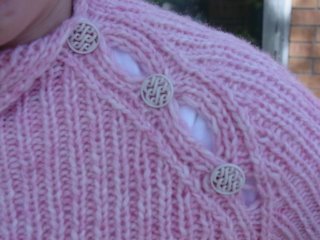 While I won't be wearing either of these sweaters anytime soon, it did cool down quite a bit this week (Woo HOO!), and I wore my Knitpicks socks Wednesday. Love them! So soft and comfy!

I'm trying really hard not to cast on for a new sweater......must finish current knits first....
Posted by Jenn at 3:54 PM