How many days until Christmas?

'Cause I've got too many gifts on the needles, and none of them are Christmas presents! 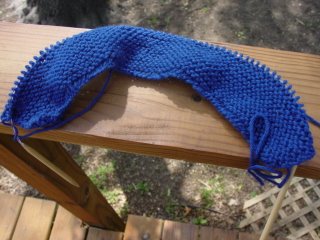 2. Blue Blob - cannot be identified as it might give it away!. 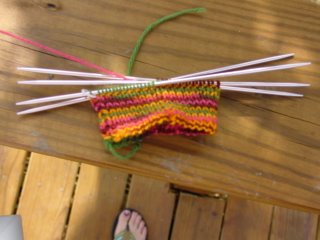 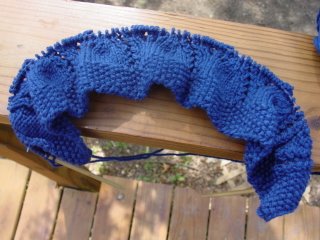 4. My sister's wedding shawl. There has been a bit of progress on this in the past few days. 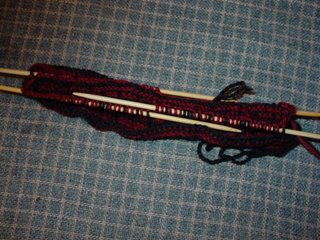 5. The Husband's Pirate Hat. Yeah. No progress since March. But when it's 90 degrees outside you don't really *need* a hat, right?

I really don't want to start thinking about Christmas knitting, but I may already have a list of possibilities.

I have a bit of a love/hate relationship with lists. I LOVE making them. But then I get really depressed when everything on them doesn't get done. My list making mania is only made worse on days that I have five minute breaks between tutoring groups. I can only go to the bathroom or get a drink of water so many times a day. Many days I use those minutes to make lists. And more lists. And even more lists. These are the knitting "goals" lists. 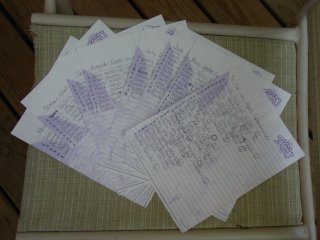 Check out that picture - "goals" through NOVEMBER! I am insane.

The hate relationship with the lists also plays in here - I have all these "ideas" of when to knit things, which makes me a.) never want to knit them or b.) knit them all RIGHT NOW.

I may have also made lists of what all of the yarn in the stash was for (also making me want to knit it all right now), and a list of all the sock yarn/small projects, AND a list of all the projects I want yarn for (just off the top of my head, not actually going through the books/magazines - that's a whole other list). It's a bit indimidating.

I also think I've reached a breaking point of sorts - I think I've got too much going at once. I tried to rationalize this yesterday by telling myself that two of the sweaters on the needles are *almost* done, and that a lot of things were gifts, but it didn't really make me feel better. My goal (and y'all have to help hold me to it!) is to *at least* not cast on anything until May 1. I'm thinking this is doable - I've got a variety of interesting projects, small and large, complicated and simple. I think I should try to limit myself to five projects at a time - seems like a good number, not too big, not too small!

What do you think? Do you make lists? How many projects is too many?
Posted by Jenn at 5:36 PM