The Girl made an offhand remark last week - "I bet you could knit an Easter Basket." I had been tossing around the idea, but hadn't seriously considered it because of the P-sock knitting marathon I'm enduring. I did a half-hearted Google search, and didn't come up with much that wasn't huge or not really a basket. Finally I found something I could work with, that was smallish, and didn't use a large amount of yarn (I wanted to work from the stash). 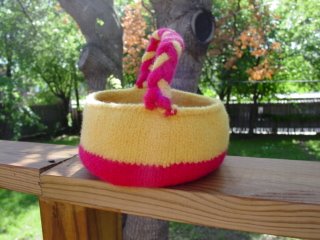 Ready to be delivered! 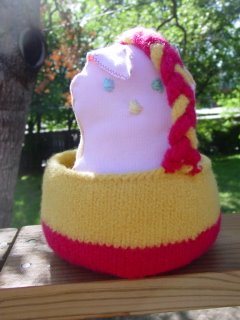 Pattern: Felted Easter Basket from Knitting-Warehouse.comm
Needles: Sz 10.5 US Clover Bamboo DPNs
Yarn: Knitpicks Wool of the Andes in Cherry Blossom (just over 1 skein), and Knitpicks Merino Style Daffodil (just over 1 skein) - both from the stash!
Started: Sunday April 16 at 11 am. Finished, felted and dried by 5 pm! It helped that it was 97 degrees yesterday! I'm doing all of my felting in the summer from now on!
Mods: I used size 10.5 needles instead of the 11's called for, because I didn't have size 11 DPNs. I also didn't do the applied I-cord edging as I was running out of time. I don't think it affects the finished object.
Thoughts: Really turned out surprisingly well, considering I used two different gauge yarns. I think it's cute! I will make more of these in the future.

I came home to an easter egg in the mail for me! But what was inside (besides chocolate, of course!)? 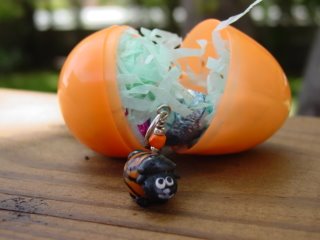 A hoopster sheepy! The lovely Kat sent us a thank you gift for participating in her March Madness pool! Thanks Kat - I love the sheep, though I am concerned that my husband is going to steal it - he's very enamoured with it!

Another Kat is having a contest (and y'all know I can't resist those!) - tell her five places other than your house or a knitting store where you have knit.

And, because I also can't resist the memes - this one currently making rounds in blogland.

Events:
1. 1858 - U.S. President James Buchanan inaugurates the new transatlantic telegraph cable cable by exchanging greetings with Queen Victoria of the United Kingdom. However, a weak signal will force a shutdown of the service in a few weeks.
2. 1920 - Ray Chapman of the Cleveland Indians is hit in the head by a fastball thrown by Carl Mays of the New York Yankees, and dies early the next day. To date, Chapman is the only player to die from injuries sustained in a Major League Baseball game.
3. 1930 - The first color sound cartoon, called Fiddlesticks, is made by Ub Iwerks.