There has (sadly) been little sock knitting this month. Aside from the Trekking sock which has gone on several car rides, the other socks have seen little to no action. 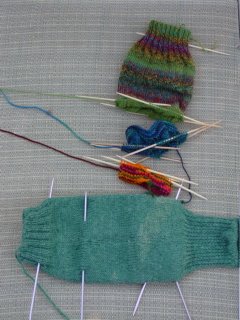 The blue sock is Cherry Tree Hill in the Feather & Fan pattern. This is it's second incarnation, as the first (on sz 2 needles) was way too big. It has been restarted (barely) on 1.5s. We'll see how this works out.

The second That 70s Sock was finally started on Saturday, after the first had sat mateless for several weeks. It's a gift, with lots of time to finish, so we'll see how soon it gets done.

The plain green sock at the bottom is for the hubbo. It is still waiting for the stitches to be picked up along the gusset - where it has been for about 3 weeks (at least).

It's driving me nuts not to cast on for another sock, but when would I have time to knit it?


Ever have a really crappy series of days? I'm in the midst of some, and I won't bore you with the details (work crap), but I decided yesterday that perhaps it would make me feel better to cast on as many projects as I could (ie: had yarn and needles for). Of course, this works a bit like retail therapy - makes you feel good for a little while, but inevitably will have cast-on remorse in the morning. I held off and worked a bit on Leaf Lace, which I had to force myself to put down to leave for work this morning. I think, if I can keep working on it, I might end June with one thing finished.

I did cheer myself up by stealing picking these sunflowers from behind the tennis courts on Monday. Aren't they pretty? So summery. 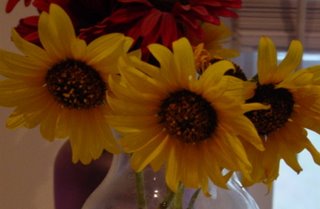 Oh - and I do have more than three pairs of shoes - I only have 3 pairs of tennis shoes.

And Cocoa sends you all licks of love for your sweet comments, and asked me tell you that she's working on an alternative to the lack of thumbs. We'll keep you posted as things develop.
Posted by Jenn at 8:10 PM