First, before the knitting, the recap. Frank McCourt was great! He was funny, and irish, and full of curse words (which I think surprised the "host" a bit!). His new book, Teacher Man, is about his 30+ years of teaching in New York State. Just from his brief stories last night, I've added it to my "to read" list. His views on what is wrong with the public school system mirror my own (which I won't go into here!), and he was warmly received in a mostly conservative town. It was a real treat to get to hear a Pulitizer Prize-winning author speak, something I'll always remember.

And the sock enjoyed it as well! I'm to the heel flap on the Sockpal sock, but I've hit a bit of ennui. I just don't want to work on it right now. Eh. And I feel really bad about this, being that it's a gift and an important one (for me at least). But gah it's boring! And It's all I've worked on for three days. Time for a break!

Last weekend, after finishing the first sockpal sock, and feeling like I shouldn't cast on for my Jaywalkers, as that would be selfish and might lead me to not finish the pal socks, I dug out my yarn and pattern for the Leaf Lace Shawl. 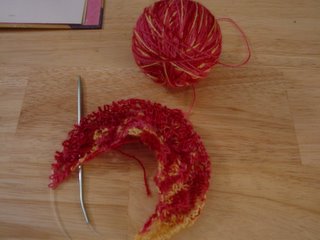 But I digress.....I was thinking of using this yarn for the Flower Basket Shawl (it just seems more flowerly to me), but I've been wanting to use it, and this shawl pattern came up first on the KAL, so this it is. I wasn't sure about using a varigated yarn with a lace pattern like this, but so far I like it. Remind me of this in a few weeks when I rip it all out, mkay?

I could not get the hang of this when I first cast on. First I had to learn to do a provisional cast on (so that crochet chain thing I learned for the ornament hangers came in handy!), and then I started to read the pattern. I've never learned to read a chart, and frankly they scared me. All those symbols! What if I make a mistake? Aaaah!

But the further I got into the pattern, the more the written directions just didn't make sense to me. The repeat between the *'s didn't seem to work out for the number of stitches. In retrospect, I think the designation of a center knit stitch wasn't made clear.

However, it did do something important for me - it forced me to learn to read a chart! And you know what? It's not so hard! Granted, This chart is fairly simple, as this is a fairly simple knit, but At least I've got the basic idea now.

The pictures shows my progress - the first chart down. I thought I'd attack this in small clumps. I hope to work on it more this weekend - we shall see. I did find it really easy to follow the chart and to figure out where I was if I looked up at the TV or spoke to The Husband. I used the tried and true "post-it note method" to keep track of my rows. Works like a charm! And yes, it was a bit addicting. I can see how people churn out such beautiful lace projects.

One of my big goals for this here blog in the coming days is to up the picture ante. I love photo-filled blogs, and I disappoint myself often, either by not having pictures and wanting to blog, or not being able to take decent photos. So I'm going to sit down and learn me this camera! For both of our sakes!

I survived the first week of subbing - not too bad. Yesterday I was in a K class, love those little ones! Vast departure from the older ones I had today. Blech. I hate the talking back and lack of respect for adults they have. Hate it.

But I did have a free planning period today and did a bit of reading. I know, I still owe you a review of book one, I'll get to that this weekend (I hope!). I was wishing I had the knitting with me too. I'll make sure I bring it next time!
Posted by Jenn at 6:03 PM