(I apologize now for any misspellings and the lack of links. I'm lazy)


What else? Any more suggestions? I'm going to try to borrow Jen's book on "cracking blogger" (Hey Jen, can I borrow your book while you're gone?) to set up two sidebars, one for knitting and one for reading. I'll post my read/to be read lists there.

And I can't resist the siren song of the "what I want to knit" list. So that will be coming soon. I don't have to do them all this year, but I'd like to have an ongoing list, if only for my personal use. 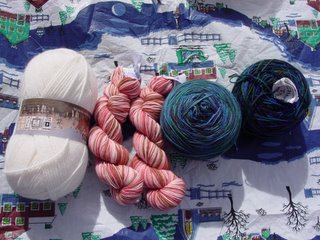 Cass Street Depot in Fort Wayne is a charming store. It is the old train depot and is very cute. (Very limited parking though!) Hardwood floors and pictures on the wall of it as a train station add to the ambience. Lots of yarn - lots of choices. Rowan, Koigu, Lamb's Pride and Cascade 220, and not too much novelty yarn (which has it's place, I just don't like a lot of it! Snob!). Much of it was priced standard, but their needles seemed a *touch* expensive. I did make a purchase (that xmas $$ burning a hole in my wallet!) - Some Cherry Tree Hill sock yarn - one for me and one for mom (OK, she bought hers, but I'm knitting them!). I told mom to pick some out and she said she didn't "deserve socks." Of course she does! The two colorways we chose are very similar - I was attempting to avoid pinks/reds/oranges/browns, and she loves blue. There we are. 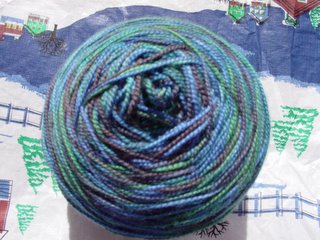 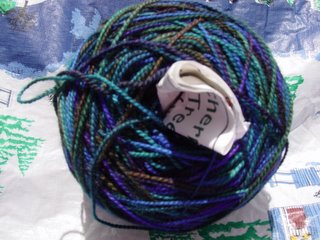 We happened upon a yarn store across the street from the bridal salon - Knit Stop in Indianapolis. So new that it still smelt of fresh paint. Organized by color (which I don't care for) and not a lot of regard for things that "go together" ie: no special spot for sock yarn, mohair mixed in with wool, all shoved in the same cubby. Very busy, with only one employee working. I was on a five minute time limit and as it seemed overpriced, I didn't last more than 3. The one thing I did like - they had a fireplace and an (empty) dog bed in front of it. A shop dog! Cute!

I managed to convince mom and sis to drive a bit across Indy, to visit the Mass. Ave Yarn Shop. We got a bit confused with the one way streets and all, but were successful. Imagine my delight when I see a *sale* sign on the door - all yarn was at least 30% off, some 40% and 50%! Of course, I was overwhelmed, and trying to hurry as we were hungry and it was past lunch time. The shop is huge - possibly bigger than my house. They had the biggest book/pattern selection I've ever seen. And one whole "wing" of the store that had a play area, a full kitchen and a washer/dryer setup (for felting of course!). I think they were organizing by fiber content, though some things strayed. I did like that they had most of the cotton yarn together, novelty together, etc. I was sad to see that the Lorna's Laces had already been picked over (and no more in the back!), but did score some Artyarns Ultramerino in a beautiful pink and brown colorway for some socks. 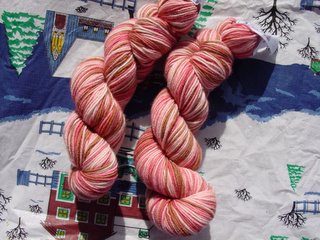 Things I learned from the yarn crawl:
I need to stop buying sock yarn. I easily have enough for one pair every month this year.
I need to keep a list of what I want to knit (more on this tomorrow). When faced with a sale, I freeze and cannot remember ANYTHING I want to knit.
When faced with a sale, engage your brain and look in the freaking pattern books right there in the store! Jeez!
Maybe the yarn shop dream is possible. When we win the lottery. I keep telling myself (and others) that all these visits are just research.

Sadly, I went to two of my LYSs today and was disappointed both times. Neither had the pattern I wanted (for sis's shawl), and the crochety lady at Jenningstreet wasn't very helpful (though she did offer to order the pattern after I asked, but she marks it up to more than it would cost me with shipping from somewhere else!).

Finally, a logistical question for all y'all. I really want to make the Fairly Easy Fair Isle Cardigan from Stitch 'n Bitch Nation. But what yarn to use? I'm torn between the Knitpicks Sierra, Elann's Highland Chunky and Kool Wool.
I *think* I can get gauge with any of them, the price difference is small, but I'm wondering if the elann would be better because it's "wool wool," how the Knitpicks would hold up, but would it be softer b/c of the alpaca content, but the kool wool is machine washable. I've never used any of these, but have used other Knitpicks products (and have not been disappointed yet). Any thoughts/comments/suggestions would be greatly appreciated! I want to buy yarn!

Visit Amie to knit 2000 socks! I'm in! And I joined the ABC Along (see ring in sidebar), and I'm thinking about my "A" picture.

In closing, my deepest apologies to those who found the blog through searching "jenn naked" and "naughty private dancer." Imagine their surprise when they found boring knitting posts!
Posted by Jenn at 8:27 PM