Two FOs for you today - one has been finished for a while, and the other just a week.

Here is Mom's scarf, a secret until she opened it. 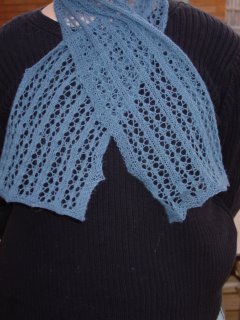 Pattern: Little Leaf scarf by Sylvia Harding (found via a link on Wendy's blog.
Yarn: Misti Alpaca Laceweight in blue, less than half one skein
Needles: US Sz 5 Susan Bates Circ
Dates: Early to Mid December
Mods: None
Thoughts: Very easy to memorize pattern, but makes a cute design. A GREAT first lace project - not too many tricky stitches, but looks really pretty. A bit tricky with blocking, since I didn't have blocking wires. I threaded a piece of yarn through the ends a la the Harlot, which worked great for the top and bottom, but I was afraid it wouldn't pull out the pattern enough in the middle. I tried threading a piece of yarn here, but it just didn't pull out right. As a result, it has a few "pointy" bits, but I'm SO not stressing over it. I hope she likes it! I'd make another, and make it a bit longer. 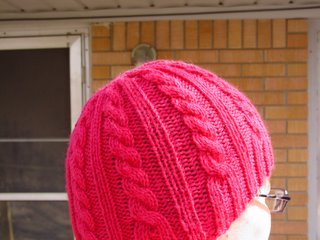 MY hat!
Pattern: Modified Basic Cable/Irish Walking Hat
Yarn: Knitpicks Wool of the Andes in Cherry Blossom 1.25 skeins
Needles: US 8 Clover Bamboo DPNs
Dates: Monday December 26 - Wednesday December 29.
Mods: Twelve rows of ribbing on the brim, six cable repeats, one added cable section.
Thoughts: Still a bit too big. And not long enough to fold up the brim. But I really like the color and it is cute. I'll do sis's with one less cable section, but otherwise the same.

In other excitement, I'm really trying to resist adding to the January goals, and from casting on too many projects at once! I still have to seam the baby cardi (which I will count as a 2005 FO, as it was knitted in 2005), but I'm going to have a nice long sit down with my Knitter's Book of Finishing Techniques before that happens.
I've ordered Knitting Vintage Socks with some xmas gift return $$, and I'm feeling a coming yarn order. I've also got to order the pattern and yarn for Sis's wedding shawl, but more on that later!

Indiana stash enhancement photos tomorrow and tales of the best yarn store I've been to!
Posted by Jenn at 9:07 PM