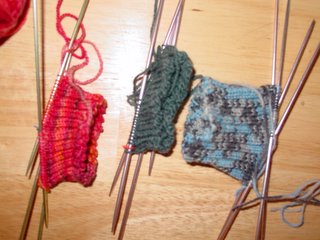 I seem to have a problem. Three socks. Three cuffs. No other progress.


The pinkish/red socks are my Jaywalkers. There really should be another sock here too. Use your imaginations. Because I cast on for these Monday, knit up the cuff and several rows of the pattern, they seem to fit fine so far, but you know me, worry wart and all. Everyone else seems to have had such big problems with them being too small, I would hate to knit 1/2 a sock and have it not fit. I know, it's all about the process, but really, I'm starting the "Count Your Socks" with only two pairs! I want socks! So I ripped it all out, and decided to use size 2 needles. But then I worried that I didn't want the cuff to be too big, so I decided that I would knit it on size 1s and switch to 2s when I got to the pattern. Do you see the idiocy here? I ripped out the cuff knitted on size 1 needles so I could reknit it on the SAME SIZE NEEDLES! Idiot.

The sock in the middle is Whitby for the KOTR KAL. I'm just a bit behind. I decided I wanted to knit this for The Husband (why? He already has two pairs of socks! My turn!). However, Nancy Bush, love ya, but for pete's sake, could you offer me some choice in pattern size? After MANY hours, several gauge swatches, WAY too many episodes of "24" and way too much f'in maths (three pages worth and LOTS of drawings of how to get the knits and purls to line up right), I think I've got it. Seriously, I had to draw a little circle of knits and purls to count up how many stitches I would need with my gauge and the need for more stitches than the pattern called for. I'm not sure this pattern modification crap is for me. But if it works out, I'll be pretty excited.

And finally, this last sock is sock two of the sockpal savior socks. Ahh. Simple. Stockinette. One already done. Giddyup.
Posted by Jenn at 7:05 PM