So my weekend goals didn't go so well.... 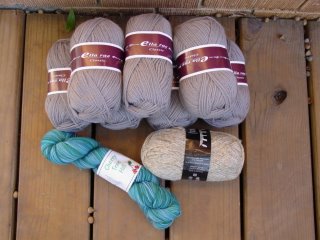 Yeah. Seven balls of Ella Rae for the Cabled Cardigan from the fall VK (number 19 for those of you with the magazine who are curious). Can't resist. The blue/green Cherry Tree Hill is some of their potluck that I fell in love with. For me. And the Trekking is for hubby - I really shouldn't let him into the yarn store. He always ends up picking up something for himself (but for me to knit for him, of course!). 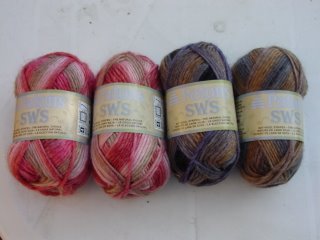 And I picked up some of the Paton's SWS for scarves for me and hubby (he has been complaining about his cold neck). It was on sale at Michael's - as good an excuse as any. I also got some dishcloth cotton, but y'all know what that looks like.

The sweater knitting did not go as planned either. I was almost 3/4 of the way through the first sleeve of Licorice Whip, when I stopped to try it on and it was ENORMOUS. I could have put both arms in one sleeve, but as that's not really the look I'm going for, my only choice was to riiiiiiipppppp. I did restart (doing some rapid decreases in the armpit region), and I've gotten it back on track. Sadly, the sleeves will not be done as soon as I had hoped. Sigh.

Kerri and I had a bit of a brush with celebrity as well on Saturday - Vicki Howell was signing at Michael's (of all places) on Saturday. We weren't sure how to approach her, as we didn't have a book to be signed, and she wasn't speaking or anything, so we just gawked for a minute and moved on.

However, all was not lost. Stay tuned tomorrow to see what happens when you don't go to Rhinebeck - you knit!
Posted by Jenn at 7:27 PM