Getting things off my needles

I know it's shocking, but I actually have some FOs for you. Nothing major, but actually finished objects. You may need to sit down.


I finished a birthday gift for my dear, apparently hatless, friend who lives in Massachusetts. When I made this hat for my sister, Jules requested one. Hers looks exactly the same, which is good, since I forgot to take a picture of it. 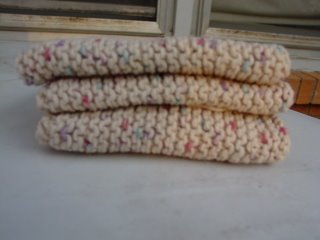 I also finished up another set of "special order" dishcloths. Time for some for me! 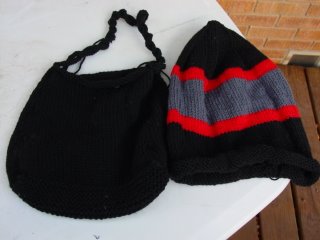 I finished and felted Sophie and a felted hat. 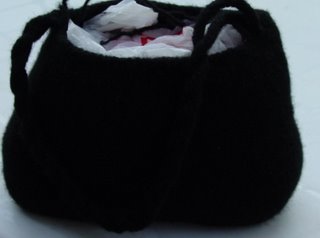 Pattern: Sophie from Magknits by Julie Anderson.
Yarn: Knitpicks Wool of the Andes in Coal - 2 skeins
Needles: Sz 10 1/2 DPNS and circ - both Clover bamboo
Dates: mid/early September to late September.
Mods: None.
Thoughts: Great basic pattern. I love the way the Knitpicks felts - it's very sturdy and not too hairy. 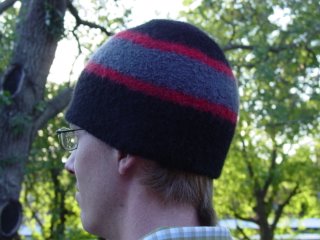 Pattern: My own, based on a basic hat pattern.
Yarn: Knitpicks Wool of the Andes in Coal (one skein), Mist and Red (just a bit of read and less than 1/2 a skein of Mist.
Needles: Sz 10 1/2 DPNS - Clover Bamboo.
Dates: late September to September 30.
Mods: None.
Thoughts: Was a bit too big the first round of felting and a bit too small the second. Hubbo and I did some massive stretching and it's OK. Not perfect, but wearable and warm. More modifications to the pattern are necessary before I do another. 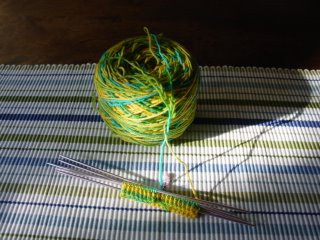 Today's post brought to you by a new Socktoberfest sock. Birthday Lorna's Laces (in Daffodil) in the P-word socks from Knitty. Loved this pattern the first time I knit it (for my Sockapaloooza pal), and I'm excited to have a pair of my own.

I'll try not to cast on a new pair tonight. No promises.
Posted by Jenn at 8:19 PM