One Socktoberfest sock down, 12 to go 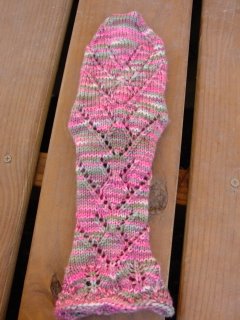 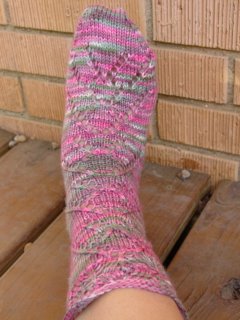 The first of the Friday Harbor pair is done. The lace pattern is hard to see, due to my white as snow skin, but it's there. I'm really pleased with this first sock, and the second is already in progress! (Shocking for me to cast on the second one right away. I almost didn't, as all the new, and some old, yarns were calling. But I did the "right" thing, just to have at least one completed pair this month.)

It's a good thing it's been Socktoberfest around here, as it was unseasonably warm last week (97 - yuck), so socks were mostly all I wanted to knit. However, it has taken a chilly turn. It's only supposed to be 63 tomorrow. Wouldn't it be great to have Licorice Whip done to wear to school? Yeah, except I don't think the last 5 inches on the body and the two sleeves are going to knit themselves, and I have to teach all day and then go to a five hour inservice tonight. Socks I might be able to sneak under the table, but not a big, slightly bulky sweater. Oh well. It'll get cold again, right?

In other sock news, one of the pairs of socks decided to go AWOL this weekend. The gift socks attempted to remain in Austin (hey, I understand, it's a lot cooler to live in Austin than in Fort Worth), but refusing to get back into the knitting bag. However, the sock wranglers hotel employees wrestled it into a padded cell envelope and it is en route. Whew! I would have hated to start over again. Thank goodness for quick thinking employees!
Posted by Jenn at 3:57 AM