Socks on a Train

So it doesn't have quite the same ring to it as Snakes on a Plane, but it will have to do!

On our first day of vacation (after the driving part, that is), we rode the Durango Silverton Narrow Gauge Railroad. Four hours up and over three back made for lots of knitting time!

The trekking sock went along for the ride, but refused to pose for any pictures (she was being a brat), so the blue Feather & Fan Project Spectrum June sock had to take her place. 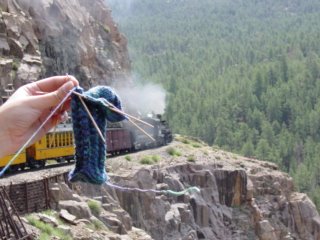 She hangs dangerously out of the train. 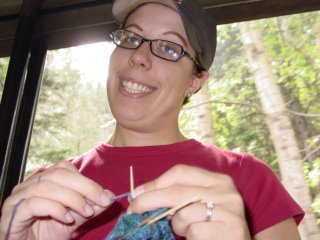 The rest of the family had to document the knitting while standing on the train. 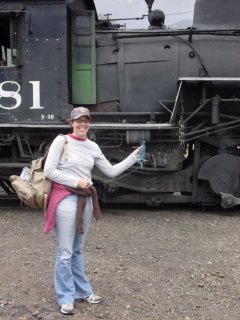 The diva had to have her own portrait with the engine.

Hubbo really wanted to take a picture of her laying dangrously on the tracks, but we didn't have time to get one before the train left.

The best part of the trip was not so much the ride. It was our first stop. We were barely out of the station when we heard a bang. Everyone leaned out of the windows, and this is what we saw. 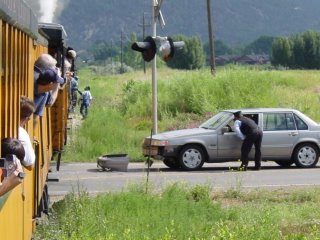 Yes, an accident. But we didn't hit the car. No. The car hit THE MIDDLE OF THE TRAIN. Even with flashing lights AND A GIANT ORANGE AND BLACK TRAIN, she hit us. Luckily, she wasn't going too fast and she was driving a Volvo, but still. Honestly people. How do you *not* see the big train? (And yes, she was fine. Terribly mortified, but fine.) 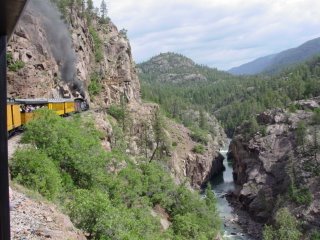 The train ride was fun. A little long, but so pretty. If you're ever in Western Colorado, take the time to at least ride it one way. The hubbo and I had both ridden it as children, and wanted The Girl to have a chance too. It turns out, through our crack research, that we were there within weeks of each other in the same year. I was there in July of '87, and he in August. Freaky, huh? We even had our picture taken in front of the same part of the Silverton station.

I have many more adventures to share with you, but blogger, with it's five picture per post rule, will force you to wait until tomorrow!
Posted by Jenn at 7:33 PM