When we're on vacation we all like to indulge a bit, yes? Well, I'm on "sort-of" vacation until August first (some call it vacation, some call it unemployment). So, on Monday I indulged myself a bit. To the tune of several new projects. 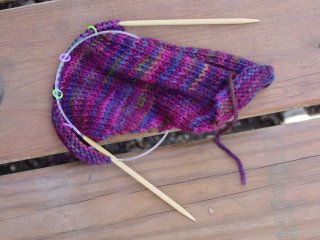 A lovely "mini-Clapotis" from Mountain Colors. I'm using the original Knitty pattern, but I only worked the increase section once, and I'll do the straight section until I decide it's long enough, then decrease and finish. I love the colors, though they're really hard to see here. 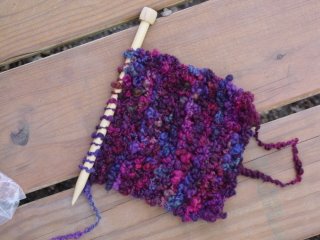 A chunky scarf in some discontinued Mountain Colors funky stuff (I think). This and the skein for Clapotis were gifted to me by one of my momma's friends who has moved to Florida and decided it's too hot to knit. Yay for me! This stuff is fun, and will be a gifty for someone. 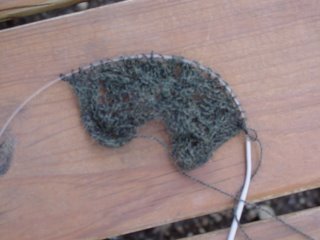 A restarted Branching Out in Misti Alpaca Lace. I ripped this at least twice last fall, but I really like the pattern, and wanted to try it again. And I needed another project like I need a hole in the head, so why not! So far, so good - two repeats down, many more to go. My fingers are crossed that all goes well this time, as I don't think the yarn can stand to be ripped again. 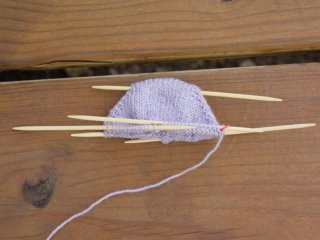 My first toe up socks! I'm using the "magic cast on" from the Spring Knitty (too lazy to link). It was a little fiddly at first, but much easier than the figure 8 cast on I tired last year. I did rip and reknit it several times, for both practice and to get gauge. I'm using the yummy Koigu, and I'm hoping to have enough from one ball for footies - I'll use a different color for the cuff if I need to. 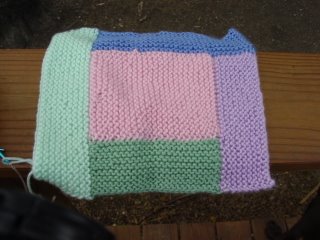 And finally, I've been holding out a bit on you. I started another project in the car on the way home. A wee little project. Yep. I'm Log Cabining. And I'm really enjoying it. This one will be a Christmas gift for The Girl. This one has grown a bit more since I got home, and I'm already planning more. The only real problem, is that even with airconditioning, this will be really hot on the lap real soon. It will probably get put aside until later in the fall when it does. Until then, I'll keep knitting!
Posted by Jenn at 8:34 PM