Cleaning out the WIP drawers

The new year is traditionally a time for fresh starts, cleaning and reorganization (or organization, depending on your previous habits). While I didn't start any new projects yesterday, I did clean out the drawers today. I haven't been knitting long enough* to have any "real" skeletons in my closet (in fact, all that is on the needles was cast on in 2006), but it has been a while since some projects have seen the light of day. Time to check in on them, and to see if they've learned to knit themselves.


Green and pink Trekking socks - sadly, long neglected. These have been on the needles since this summer. The first sock was finished during Socktober, and the second cast on. I worked on it in the car for several weeks until I snapped one DPN. Then another. I was a bit afraid to work on it after that, and it was time to start the Christmas knits, so I put it aside. I drug it back out this week, and I'm happy to say that the heel has been turned and I am into the gusset on sock #2. Hopefully they can be finished in under a year.

Hubbo's Sweater - I'm through the first ball of yarn (and this being knitpicks yarn, that's not saying much). I expect to work on this a lot when I'm done with the Central Park Hoodie. I'd love to have it done for Valentine's Day, but I'm not going to force myself. 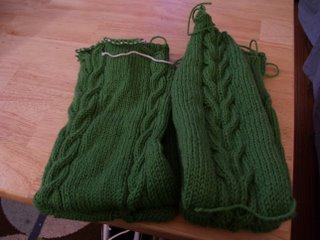 Central Park Hoodie - I'm through the back, and this week I finished both sleeves. Two fronts, a hood and the bands and I'm done. Hopefully done in the next week or two. (The color is way off in this picture, but it's a good shot of the cables.)


Hubbo's Trekking socks - the first sock is nearly ready to start the heel flap thanks to The Good Shepherd. Lots of knitting time in a 3 hour movie!

Bamboo socks - the first sock waiting to have the heel turned.

Icarus - through several rows (2 repeats? 3?). Love it. Love the yarn, love the pattern.

Anastasia Socks - worked on these a bit last night. The yarn is Claudia's Handpainted in sport weight. I am an idiot, who cannot follow a pattern (plus I wasn't sure it was "right" for the yarn), so it was ripped last night, and reincarnated today as a simple 2x2 ribbed sock. It's yummy.

Grey socks - into the pattern, but barely.

My So-Called Scarf - not sure I like the pattern in the yarn. Everyone I ask seems to, but I don't know if they are being honest. I'll post a picture here in a few days to get y'all's feel for it.

Glastig Hat - no progress in quite some time. Hopefully will be done while it is still cold out!

Log Cabin Blanket - resurrected this week, as it is chilly here in the mornings, and this does a great job of keeping my lap warm. Would like it done by March for The Girl's birthday.

Sock Log Cabin - added more yarn to the pile for it, but no progress in months.

Pullover Flair - lounging at the bottom of the drawer.

Kyoto - Hanging out with Flair.

Branching Out - I like it, but I haven't been spending time with it.

I think that's everything. There is also a red scarf in the drawer, but I really don't like the yarn/needle/pattern combo. Debating ripping it.

I do have some new projects in mind that I'll be sharing with y'all soon, and I did start a simple hat for Hubbo last weekend. Back to the CPH, in hopes that I can wear it soon!