Well, that's what Target calls it. And I'm really not a "fancy" yarn person. I'm using some fun fur for the cat bed, and I really think that it's why I don't want to work on it - I don't like knitting with it. However, I was sucked in by this Target yarn. It just looks so much like fall, and I'm aching for fall here (since temps this week should be in the 92-95 degree range). I think it will make a pretty fun scarf, and if I don't like it, I'm sure I can gift it to one of DD's teachers. 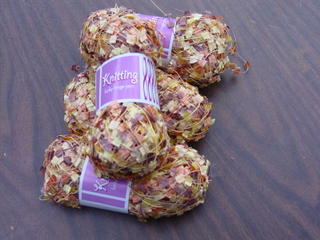 The real question I have is: what size needles to use? Any tips?

I finally saw the Knitty Gritty Sock episode. I watched once back in January, long before I was ready to attempt socks, and forgot much of it. I tried TiVoing it several times, but they had their signals crossed, and even though the TiVo said it was the sock episode, it was the Knitting for the Home episode. Anyway, after much of this, I finally sucessfully watched it yesterday. And boy was I disappointed. I was surprised to see that I already knew how to do everything they were talking about (but it did make me feel good about my knitting abilities!). I've noticed that while I really enjoyed watching this show when I was first learning, now it seems a little cheesy to me. Hopefully they'll have new episodes sometime soon and they will be aimed at more intermediate/advanced knitters.

We watched Diamonds are Forever tonight. DH is appalled that I have only seen one James Bond moive (the one with Halle Berry which he says doesn't count), so I agreed to watch them. I wasn't really impressed by this one, but he said it's his least favorite Connery Bond one.