Or, What DH just said while watching Survivor. 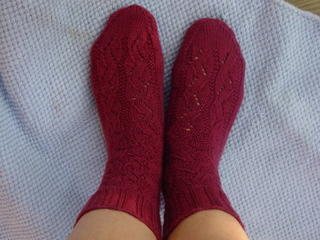 I've been really tired lately, and blogging (or reading blogs) has been sparse. Plus, there was that Lost show on last night. That I just sorta had to watch. I'm not a big one for spoilers, but I had goose bumps at the end of the episode!

DH and I got just the specials disk of Lost from Netflix, and watched almost everything. I most enjoyed the stuff about how they "created" and cast the show, and how they shot the pilot. Oh, and how they "made" the music - very cool. We watched the special episode last night, even though we were a little wary that it was just repeat of the DVD material - it wasn't, but was just a "Lost in 45 minutes for those who've never seen it." Oh well.

Geeky Moment Number Two: After we couldn't figure out what someone was saying during the episode (see, no spoilers!) I got on the internets and looked, and got sucked into several "forums" that discuss the geekiness. I could have spent hours reading these theories, but was almost asleep sitting up, so I went to bed.


There has been knitting, though simple stuff I can do while reading. I just finished reading Goodnight Nobody by Jennifer Weiner. Weiner is one of my favorite authors, and the new book doesn't disappoint. I wouldn't say it's my favorite of hers (Good in Bed and Little Earthquakes probably tie for that honor), but it's good. I've had it for a few weeks, and put off reading it because I didn't want it to be over. I know - nerd. There may have been a new knitting project during this reading, but I'll hold off pictures for a few days (and by then I might be done!).

Must go - time for the Decemberists!
Posted by Jenn at 5:36 PM