We had school today. And the weather wasn't nearly as bad as it was supposed to be. We did loose power for a while at school today, and it was starting to get pretty chilly, but they kept us at school and the power came back on in the early afternoon. One of the news channels erroneously reported that we would dismiss early, so of the dozen kids I had who actually came to school, several left after lunch as parents picked them up early. It was pretty much a wasted day - I didn't want to get ahead with so many kids absent, so we played a few (educational) games and had free choice centers, but by the end of the day my kids were BORED. They were asking for work to do. Repeatedly. Poor things.

We'll see how tomorrow goes - we're supposed to have a hard freeze, but the roads are mostly dry and there is no more precipitation in the forecast, so I'm guessing we'll go on time. Several districts have already delayed, but we hold out for the bitter end.

Luckily, even though with the windchill it was about 17 degrees at dismissal, my head was warm thanks to my new hat! 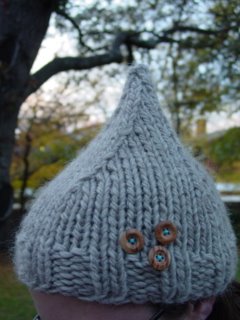 Pattern: Meathead hat by Larissa - test knit for her new book!
Yarn: Lamb's Pride Bulky - one skein.
Needles: Size US 15 Clover Bamboo Straights
Mods: None.
Thoughts: Love this hat. I hated this yarn when I used it for the felted bag I taught at the store this summer, but something about the bulky version is so much softer. Love the bulky. Wish I could get it locally. I picked this up at mom's LYS while visiting last week. May have to order some so I can make some more meatheads!

Hubbo and I agonized over the embellishment. I tried several things, and settled on these cute wooden buttons we found at JoAnn's. I'd like to make some more hats and try some different embellishments. (Have y'all seen how Larissa embellished her first version? Go see!).

I knit the adult small/medium size and had a few yards of yarn left over. I may add a few rows to the next ones I knit before I start the decreases.


My feet will be warm tomorrow - I finished the Rib and Cable socks tonight! Pictures tomorrow in daylight (and maybe snow!).
Posted by Jenn at 8:06 PM