ETA: This was supposed to go up last night, but blogger was down, so you may get two posts today!

Nothing outlasts my yarn quest....

So (obviously) still lacking yarn. I did get an email today (only after I sent an email and called again) stating that they were out of the black yarn, and had just received some more and shipped it today. I was told that they emailed me to tell me about the out-of-stock status, but I never got that email. Oh well. So it should be here Saturday, just in time for me to leave for a wedding. I predict cast on will happen Sunday, two days behind schedule.

Of course, the finishing of the Jaywalkers left me project-less, and we couldn't have that. So I grabbed the ball of Debbie Bliss Cashmerino Superchunky I bought out of the half-off bin at a LYS, and, after refusing to use two different patterns, cast on for myself, with my own maths as help, a simple 2x2 ribbed hat.

And after two episodes of 24 and Lost, I cast off. I love it. 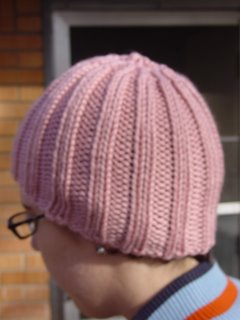 Pattern: Cast on 60 stitches, knit in 2x2 ribbbing until close to top of head. (about 8 inches from the bottom of the hat) Decrease round: K2tog, p2 around. K1 p2tog around. Knit 2 rounds in 1x1 ribbing. K2tog around. K2tog around. Draw yarn through remaining stitches and cinch up.
Yarn: Debbie Bliss Cashmerino Superchunky color 16009
Needles: Clover Bamboo US 10.5 DPNs
Dates: Wednesday February 8
Thoughts: Seems to be a bit pilly, but so freaking soft! And just the right amount of snugness. I'm not sure where the pointy bit on top came from, but that's OK.
Finished just in time for it to get "cold" here - about 50. Brrrr. Not.

I also cast on for some wrist warmers yesterday morning, but after a few more rows yesterday afternoon I ripped them out as they were not snug at all. 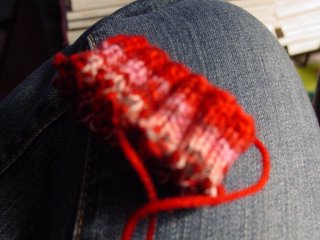 I was feeling pretty crabby yesterday afternoon, what with the lack of yarn and all, and the ripping of the wrist warmers didn't help, so I attacked the stash. And dug up my lovely neopolitan ball of Trekking XXL and cast on for another pair of socks for me! They will be my "travel/mindless" knitting during the Olympics and I'd just like to sayconfess my neuroses, that I love those tiny stitches. Somehow they are so calming. It was as if I could feel my blood pressure return to normal. Ahhh. I will show you this afternoon. They are so cute, and my first experience with self patterning yarn - fun!

I've spend most of the evening catching up on blog reading (I can't read blogs, knit and watch 24/Lost/Project Runway at the same time!), and creating future posts. Oh, come on, you know you have been doing it too! Saving up posts so you have something to post during the Olympics! I have decided that each day of the Olympics you will get a photograph of my Olympic knitting, progress or not, so that it is more "real time" for y'all. I think it will be interesting to see if there are more or less posts in my bloglines to read for the next 16 days.

Y'all have been so supportive in the yarn quest. I hope to have something to show you this weekend. And yes, in keeping with the spirit of the challenge, I've not even cracked a book to read about Fair Isle yet. I guess that will give me something "olympic-ey" to do tomorrow night while I knit my sock. Mmmmm. Socks. I'm feeling a theme this year....

I'm kind of enjoying this knitting for myself!
Posted by Jenn at 4:06 AM