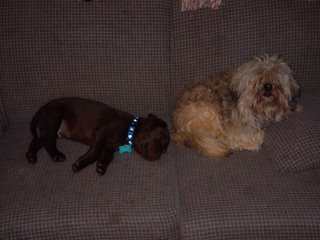 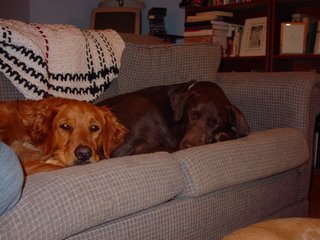 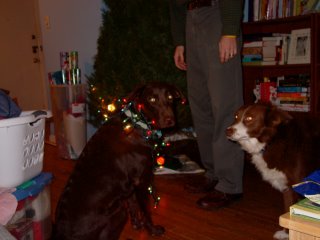 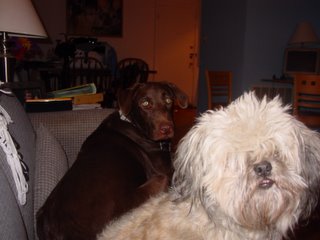 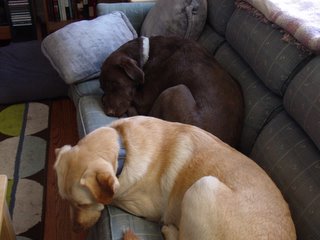 We have three. We sometimes have more when we keep Miles' brother, Gus, and Olivia.

We've always been dog people - The Husband and I both had dogs growing up - him several, me two.

I adopted Rocky in the summer of 2001. I was living alone and really missed having a dog. I looked at the Humane Society, but the only small dog they had hadn't been there 48 hours - the amount of time the owners get to change their minds. And when his 48 hours were up, I'd be at work. So that weekend I went to Petsmart during their adoption days. Rocky was curled up in a tiny ball in a small cage. He was the only small dog they had, and when I heard that he was a "senior" dog (over 7), I was worried that no one else would adopt him (because he wasn't a puppy) and I couldn't let him be put down. So home he came!

He was very unhappy in my apartment. He was alone all day while I was at work and would show me his displeasure on the living room carpet. He also went nuts if I tried to put him in his kennel and bit me pretty badly once.

When The Husband and I decided to move in together we were nervous - he had Cassidy, and the group I adopted Rocky from had said that he couldn't be around other animals. No reason why, but still. We shouldn't have worried - they got along great, to the point that they would not go outside without the other. Not really friends, but companions.

It was just the two of them until last year when Miles came home. I had been begging for another dog and The Husband kept saying no, until he brought me to Miles.

We really want a Great Dane too, but that will have to wait until we have a bigger house! For now, The Husband says "no more animals!"
Posted by Jenn at 8:37 PM