My imagination has left me

And I can't think of a clever title. Forgive me.

First things first - the ankle is somewhat better. The swelling has gone done quite a bit, and the bruising is light. It still hurts to move side to side and to bend it, but I can bear weight on it. Thanks so much for all your well wishes - and I do recommend it for getting knitting done! But it does hurt, so there is a downside....

Before I fell, I got some knitting done! I think I was inspired by my knit-a-long update - all those projects half done! Must do someting about it... 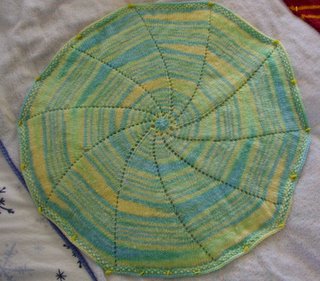 Pattern: Pinwheel Blanket by Genia Planck.
Yarn: Red Heart Baby Sport
Needles: Susan Bates Sz 6 DPNs and Circ.
Dates: Started early July, finished Wednesday December 7.
Mods: None
Thoughts: Had to cast on twice, tricky but doable. I really liked the pattern until I was up to about 50 stitches between markers. Next time I'd use worsted weight yarn and place markers at the yo spots, sometimes I'd be chugging along and forget and have to tink back. I would have finished this a long time ago if I had just worked on it. It ended up about 18" in diameter. I would like it bigger, but c'est la vie. I did three rows of seed stitch for the edging and bound off. It doesn't lay flat, but I think that's OK. 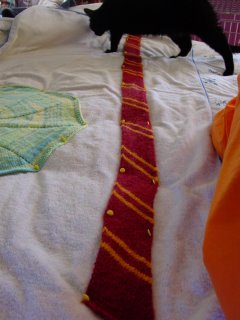 Pattern: HiP Scarf by Alison Hansel
Yarn: Lioin Brand Wool Ease in Burgundy and Gold
Needles: Susan Bates Sz 7
Dates: Mid November -December 7
Mods: I did fewer repeats because it is for The Girl, not an adult. I also tried a seed stitch edging to help it lay flat, but that didn't help much.
Thoughts: Great, fun pattern. Quick and easy! It did not block well, but that of course, is due to the acrylic. I do kind of like the way it looks twisted up. I'll try to get a modeled picture for you this week. 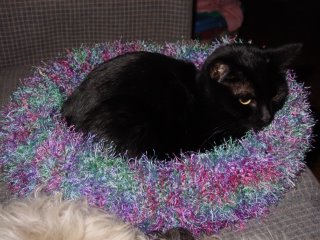 Pattern: Cat Bed from Stitch 'n Bitch: The Knitters Handbook
Yarn: Lion Brand Homespun and Fun Fur.
Needles: JoAnn Sz 10.5
Dates: February -December 9
Mods: I used a bulkier yarn than the pattern called for.
Thoughts: TOOK FOREVER. But when I actually worked on it, it went really fast. As soon as I finished sewing the bottom to the side and sewing up the side, I put Cocoa in it and she laid right down. Must like it! Speaking of liking it, I think we have some other fans: 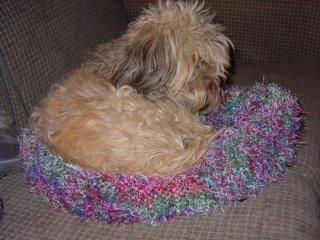 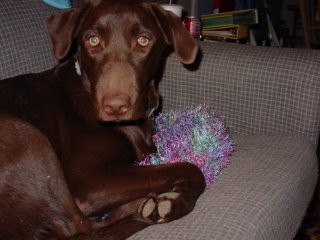 Maybe they each need their own? Perhaps next year....

I also finished mom's gift, but no pictures yet! You'll have to wait until after Christmas. But I'm really happy with it, and I hope you like it mom!

I can see the light - I'm almost done! I've made a few changes to the list - took off Nephew's mittens 'cause we bought him a cool toy, and took off another toddler hat, as I'm making something else that I hope to have done to show you tomorrow. I've gotten several ornaments done, but I'll take a picture of them all at once.