Finally. It's done. Just in time, as the wedding is this weekend! 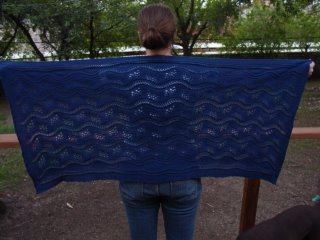 Pattern: Baltic Sea Stole by Fibertrends
Yarn: Knitpicks Merino Style in Dusk - 9 balls
Needles: Sz 8 Clover Bamboo Circulars
Dates: March-September 2006 (on and off)
Mods: I did not use mohair as the pattern called for - didn't want the bride to be itchy!
Thoughts: Bored to tears by the pattern at several points. However, loosing the chart really helped me finish it up - I discovered that I had the repeats memorized, and it was much faster to work from memory than look at the chart every row. I was really worried that it would be too "thick" - too heavy, but blocking worked a MIRACLE on this pattern. It's lighter, it drapes, it's really nice. I hope the bride likes it! 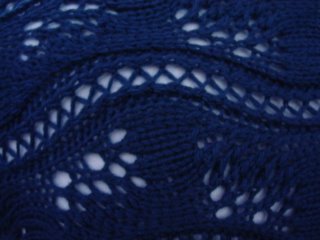 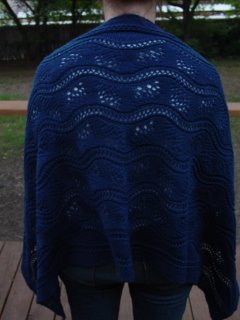