I took all of these pictures to write a tutorial last year, and I didn't get around to it in a timely manner! I'm hoping I can remember everything I did!

Last year Samantha wanted to be a ladybug. With two six month olds, her costume had to be easy. She wore black pants and a black shirt, and I had found a ladybug mask in the dollar bin at Target earlier that spring (which she refused to wear, of course!) I had a red sparkly headband left over from her first birthday party (it was ladybug themed and we had a lot of extra goodies), and I made antennae out of pipe cleaners and wrapped them around the headband. 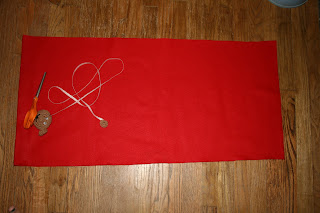 Your supplies for the wings are super simple - a big piece of red felt and some small pieces of black felt for spots. (I purchased my red felt at JoAnns - no need for fancy wool felt here!) You will also need small pieces of elastic, a pencil, string, tape measure, scissors, and a hot glue gun or craft glue.
Oh, and I apologize for the quality of the photos here - I didn't have my fancy new iphone that takes better pictures than my big camera! And it was a dark day, so the lights were on and the red fabric glares in the pictures a lot.

I measured across Samantha's wingspan and decided that her wings should come about to her elbows. Then I decided how long I wanted them to be (mid thigh) and measured the midpoint of the height of the wings. 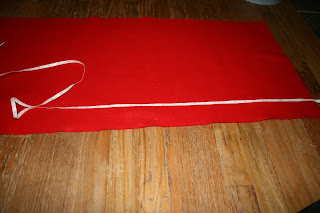 I put a mark at the midpoint and measured out the width of the wings, and made my string that long. 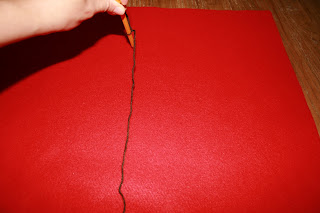 I tied one end around my pencil, held the string straight out from that midpoint dot, and drew a half circle on the felt (my pencil lines didn't show up great on the red felt, so you may want to use a marker and cut inside the lines). I then cut out the wings. 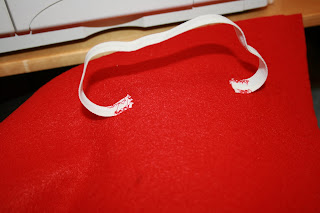 I measured down a few inches from the top and from the center, and sewed elastic onto the wings (but you can certainly glue the elastic down). Also, I didn't think about the white elastic showing on her black shirt, so I ended up coloring it black with a sharpie, so you may want to use black elastic if your ladybug is going to have a black 'body'. 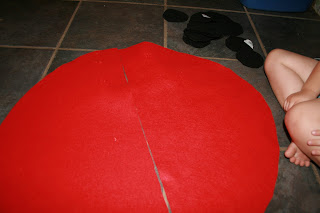 Then I cut several black circles out of the felt (I traced a glass), and when Samantha was up from her nap, she arranged the circles and we glued them down (I used the hot glue gun - she never touched it!). Her ladybug is not symmetrical, but she was three, and didn't care! 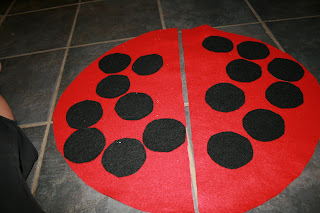 My little bugs were very adorable on Halloween! And our ladybug wings still get worn for dress up all the time!