I'm slowly but surely making my way through that list. I don't think I'll be done by Friday, but it'll be close. Sadly, there are things that were not on the first list that have since been added, but I'll save that for another post! 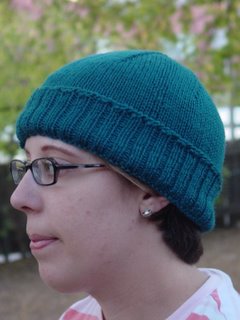 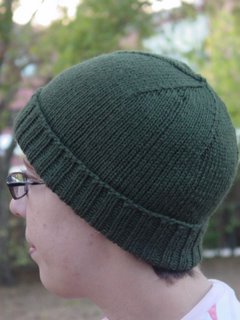 Both of these hats used the same pattern: Seaman's Cap from the Knitting Pattern-a-Day calendar, September 15, 2005. (P.S. If anyone needs another gift idea for me, I'd love this years!) I'll try to take a picture of the little boy in the picture for y'all to enjoy - it's a bit scary.....

This is the pattern I was going to use for the black hat, but it seemed that the pattern wouldn't make a hat big enough for an adult (I have since learned to read, and resolved this issue). So I tried a hat with Ann Budd's pattern from Knitter's Handy Book of Patterns. Well....I really wish I had a picture for you, but it was SO bad it had to be immediately frogged. I cast on too many stitches (my gauge was 5.5 spi, and the book doesn't tell you specifically enough what to do when you have that situation. I rounded up to 6, bad idea. WAY too big). I also was sick of knitting the black hat and just decreased when I felt like it was long enough, not when the pattern said to, and it ended up just sitting on top of my head (what with the it being too big and all).

But, when I went back to the first pattern and READ it, I found that, why yes, the pattern IS sized for adults. And though it seemed to take FOREVER (just a day in reality) it turned out great. It's snug, without being tight, you can fold the brim up, or pull it down over your ears - I want one for me!

I have two more of these to make, (one the ill-fated black hat) and I casted on for the third tonight. 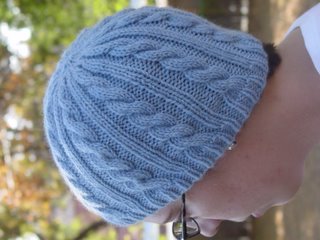 Finally! I finished up this baby today.