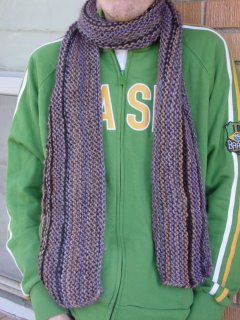 Pattern: None - I cast on 100some stitches and knit every row until I was close to running out of yarn and bound off. I did guesstimate how long I wanted the scarf to be and swatched to get gauge to decide how many stitches to cast on.
Yarn: Paton's Soy Wool Stripes - nearly 2 balls.
Needles: Size 13 Clover Bamboo Circulars
Mods: n/a
Dates: November 29-December 2. Knit only in the early morning before hubbo was awake so he wouldn't see it.
Thoughts: Good length, nice colors, and I like the yarn. Soft but not too soft.

Hubbo was whining about not having a scarf when he was forced to model dad's, so I gave in and gave him his gift early. He claims to like it, but hasn't worn it yet. We'll see.

I would like to thank TNT for their lovely Christmas gift of a special Closer. What a great show. More would be nice TNT! And Studio 60 is finally getting good. I've really liked the last three episodes - the writing is good, the acting is better, and it's funny! Thank goodness for lovely knitting TV.
Posted by Jenn at 8:27 PM