Every year I make outfits for the kiddo's parties. This year was no different - except I had to make double outfits!

I had seen some Very Hungry Caterpillar fabric at Fat Quarter Shop (one of my favorite places to order fabric from as they have a wide variety and are in TX so I get it quick!). I chose a few favorite prints and then had to decide how to use them! I wanted to make something for Ben out of this print, as it wasn't too 'girly' or busy. (This is the fabric I used for the onesies I made for the smallest guests). I thought it would be too much all over a large piece of clothing, so I opted to fussy cut it and just use it for embellishment. For his outfit I wanted something he could wear around for the rest of the summer. After seeing another finished outfit, I chose McCall's 4756 (which conveniently went on sale at JoAnn's about 3 weeks before the party - which was nice because I had been waiting for it to go on sale for about 3 months!). I used a plain grass green quilting cotton. 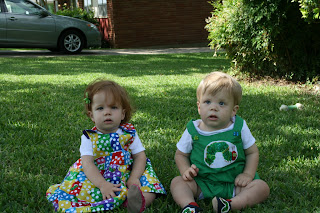 The only thing I would change would be to use a softer interfacing on the 'bib' part - but I used what I had on hand. This was my first time to use the buttonhole feature on my machine! Unfortunately, it seems to make much smaller buttonholes than it 'should.' I put a huge button in the buttonholer foot, and I had to wiggle a pencil around in the hole to stretch it out for my much smaller button. I used cute multicolored butterfly buttons (Favorite Findings) from JoAnn's.

For Ellie's dress I used McCall's 2213, which is the same pattern I used for Samantha's first birthday dress! I used a different 'view' than Samantha's dress - this one is view A, hers was D (minus the ties).
I used this fabric for the front and purple Kona cotton for the reverse (I think it's eggplant). I used more butterfly buttons for hers as well.  I also made her bloomers from that same large caterpillar print, but I don't have a picture of them. I used the bloomers pattern from Amy Butler's Little Stitches for Little Ones. I chose this pattern over the McCalls bloomers, because I made the McCalls's bloomers for Samantha and they are probably still too big for her now! I like Amy Butler's pattern (I've used it before), but it runs a bit big too - at least in the elastic estimates! I measured Ellie and cut the elastic to fit her. I did leave some extra so I can let them out as she grows.

I used the extra large caterpillar fabric to make two bibs for them to wear during cake eating!

They have fleece on the back because I was out of terrycloth, but I probably won't use fleece again because they are pilling pretty badly already.

When I was putting the fabric links in I noticed that there is a "Happy Birthday" Very Hungry Caterpillar line of fabric coming soon!

Oh, and their shoes are Robeez, and were a gift from my sister when they were born. They were perfect! You can still get them here.

Whew! I think that wraps it up! I'll be back with a post on making a birthday banner next!
Posted by Jenn at 5:36 AM