Even though B&E were only turning one (and we had 3 other guests under 15 months), we were having 7 guests ages 2-8. In the past, our playroom has been pretty destroyed after a party, so in an effort to curb the inevitable destruction, I opted to have lots of crafts available. And there are so many things you can do along a caterpillar/butterfly theme! 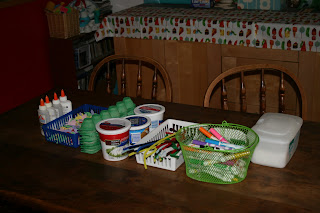 The craft table is all set up!

I had been saving paper egg cartons for a while, and hubby cut them apart for me (cut the lids off, then cut the two rows of spaces apart). I was just going to use them like that, but then I remembered that I had some left over green spray paint, so I took them all outside and they got a simple coat of green (not fully covered as I ran out of spray paint!)
I put out pompoms, googley eyes, and foam insect/flower shapes for decorating. 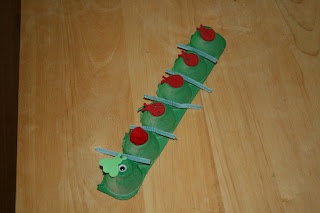 Samantha's finished caterpillar (those pipe cleaners are it's legs)

We also did one of my favorite pre-school days crafts - making butterflies! We used old-style clothespins (I always get mine at the dollar store) that I also spray painted green, and round coffee filters (also at the dollar store!). The kids drew on faces, we used pipe cleaners for antennas and they colored their coffee filters for wings. (We wrote their names on the bodies to help ID whose was whose!) 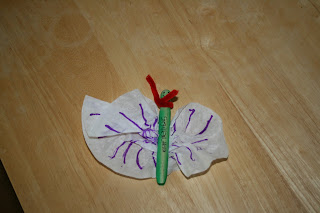 I had printed simple coloring sheets from Eric Carle's website, that we had out as an arrival activity. These were way more popular than I had expected! Just goes to show that I shouldn't overestimate the value of simplicity! (I should do a post on our crayon caddy too!) 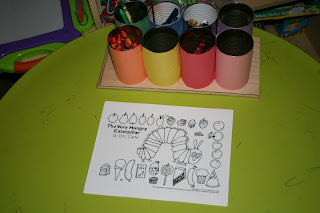 We planned a nature 'scavenger hunt.' I made a simple table in Pages (my 'Word' software), and found clip art images to fill in. I put in a bunch of easy things, so that the kids would feel successful. One thing I didn't include was a lizard - we see them pretty often, but I didn't want to include one and have the kids get upset if we didn't see one. So of course we not only saw one, but were able to catch it! 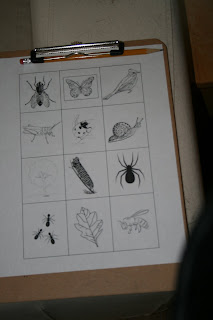 I have a bunch of clipboards from when I was teaching, so they were great for this. If you don't have any, I get mine from the Dollar Tree at back to school time. 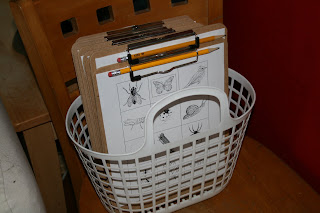 I put them out in a basket by the door, so the kids could grab them on their way out.

Our 'big' craft/activity was using freezer paper stencils to make our own shirts. I thought this would be a nicer 'favor' than a bunch of little stuff, which I what I have done in the past.  This part kept me pretty busy for a while, since I had to man the iron. Each kiddo chose an insect (I had ladybugs, dragonflies, butterflies, and worms - I already had traced them and cut them out of freezer paper prior to the party). I purchased a bunch of inexpensive t-shirts when Michael's and JoAnn's had them on sale (4 for $10). However, they don't make them smaller than a 6-8 size, so I purchased 3 toddler sizes at JoAnn's (I used coupons to save $$). Each kiddo got to choose the color of their shirt as well. 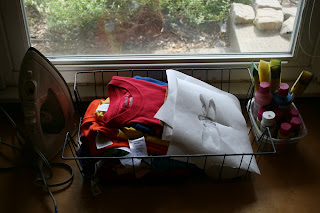 I waited until paint was on sale, so I could get a few colors without having to save a million coupons. I think I ended up with seven colors. (All good 'insect/outside' colors). I cut two leftover pizza boxes into squares to put in between the front and back of the shirts so that the paint wouldn't bleed (I usually fold up paper, but since I was doing so many I didn't want to waste the paper. The cardboard worked great - and I can reuse them now!).

I used sponge brushes, since they are not too messy, and put the paint in old yogurt containers (one of my favorite things to save! They have millions of uses!). The kids did a good job! The three year olds needed some adult help but the older kids did well independently. Since the paint was still wet when they left, I don't have a picture of anyone's shirt but Samantha's. 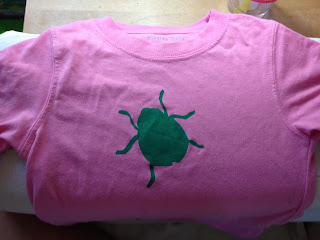 I have heard from almost everyone that the shirts are very popular! I'm glad we did something like this - it showed me that it wasn't too hard to manage at a party, and the kids really seemed to enjoy the process and the finished product! Not bad for under $3/favor!

Since we had some littles, and their parents would be busy watching them and/or their older siblings, I didn't want them to worry about painting something. So I made them shirts.

I used some Very Hungry Caterpillar fabric found here, fussy cut out some caterpillars, used Steam-a-Seam to stick them to onesies and stitched around the outside. Simple and cute!

Whew! We did a lot! I'm tired just remembering all the things we did!