I have one more decoration I forgot to share with you in part one!  I had seen this idea on pinterest, but here is the original link. I made our caterpillars a bit smaller, since we don't have a ton of wall space, and needed to display two!  Hubby used his die-cutter at work to cut out circles for me, and then I found a smaller circle to trace over each picture to cut out (I had all my pictures printed at Shutterfly when they had a free 100 print special - I only had to pay shipping, which was almost as much as it would have cost to have them printed at CVS for $.10/each, but at least I didn't have to leave the house! :). We used their monthly pictures, and I wrote how old they were under each picture. 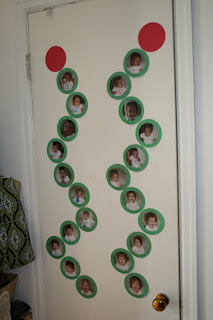 We were so low on available wall space, I ended up using the entry-hall closet door! They were adorable, and may still be hanging up. ;)

I had seen lots of blog posts about serving the food from the book for the party, and I just couldn't resist the idea!  I wanted to make some kind of 'sign' for the food, so that people would 'get' that it was the food the caterpillar ate. There are several food signs available on etsy that you can purchase and print, but no one had all of the food signs for (what I thought) was a decent price. And since we're a one-income family, I wanted to save as much $$ as I could! So we copied the pages from the book that show the food on a color copier (this is allowed for personal use!), and I cut them out and mounted them on green construction paper, and wrote what they were above the picture. 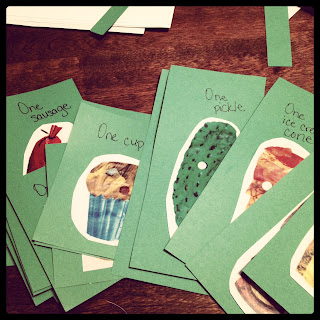 We taped them to craft sticks, and then were able to tape and/or stick the sticks into the serving dishes. 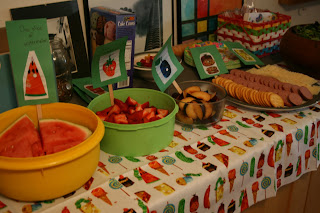 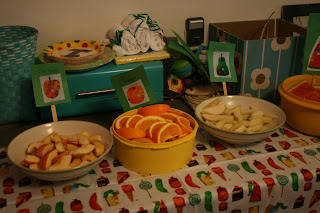 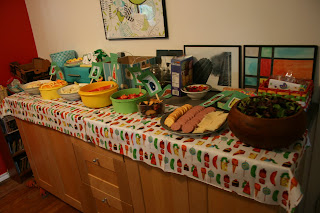 Instead of sausage we served hot dogs, which is our standard party food! 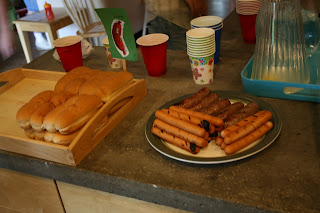 We had tea, milk, water and lemonade to drink and I couldn't resist butterfly cups, napkins and plates (also from Dollar Tree).

To 'pretty' up the food area I cut a yard of fabric that featured the food from the book in half, and taped it to our buffet. (I am hoping to give it a second life by sewing us some much needed snack and sandwich bags with it!)

Hubby worked his cake magic (his usual duty for any party!), and we had vanilla and chocolate cupcakes with green frosting for the caterpillar's body and a red frosted chocolate cake for his head. 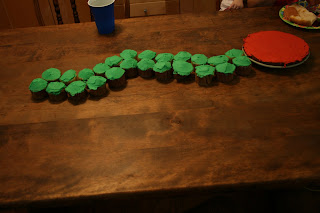 We didn't have a tray big enough, so we just set him out on the table! 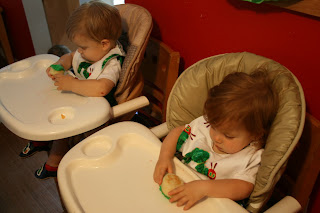 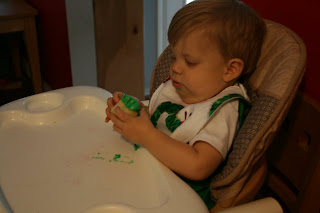 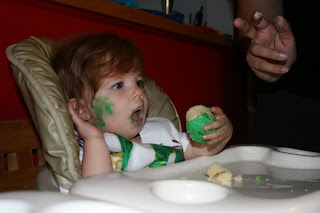