Baby's been a bad, bad girl

I haven't been blogging much in general, and very few posts have had actual knitting content lately (beyond a few FO and notes about starting new projects!), but today is different! Today I bring you my nemesis. 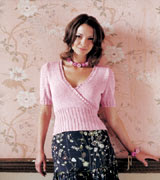 Vanessa is really pissing me off. I found her. I cast on. The ribbing looked way too small. I thought "I don't want the ribbing making me look any more pudgy than I already am." I decided that I would knit the largest ribbing size, and not do any increases for the waist shaping. Mistake #1.

I never measured Vanessa. I never even glanced at the schematic for her. I thought, "Look at the picture. I looks long on the model. I won't need to add length. It'll be nice and long." Mistake #2.

I never held Vanessa up to me. I never tried her on prior to seaming everything and weaving in every end. Mistake #3.

The thing that's really pissing me off? I never have done any of the stupid things before. I'm usually very careful to look at the finished size measurements. I add length to almost everything I knit. I always measure, I always hold up pieces to myself and try it on as I seam. 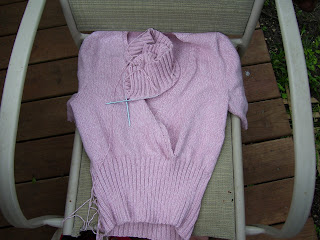 Now I know the price I pay for being an arrogant knitter. I'll spare you the belly shot of me trying Vanessa on. It may scar you for life. To help solve the problem, I've bought another ball of yarn, and I've knit 3 more inches of ribbing. Now I have to figure out how to graft in ribbing. (I didn't pick up and knit down 'cause then my "v"s would have been facing the wrong way.) I haven't figured out a solution for the lack of waist shaping issue (other than eating an entire panful of brownies every night, which isn't really the look I'm going for today), but I'm thinking about trying to take it in in the seam somehow.

The ribbing is finished. The grafting should begin tomorrow. Don't blame me if I start more new projects instead (this would be in addition to the several I've started recently and haven't shown you yet. More on them later.).

Lesson learned? You are never "better" than your project, and don't trust models. This one probably had a torso measurement of 15".
Posted by Jenn at 8:44 PM