I'll admit - I wasn't too gung ho about PS this go-round. I think a lot of that stems from me "forcing" myself to work on color-oriented projects last year. I know that it is what you make it - I just made it too stressful for myself (and I still haven't finished my August grey socks). I wanted to take a more laid-back approach this time, to the point of not even officially signing up. I did still want to work on at least one project in each color triad (though I have to admit that the red/black/metallic grouping is not appealing to me, though I have at least one red and one black project. I digress). But I wasn't going to "force" myself to do anything. If something got done - great. If not, it's not like the PS (or the knitting) police would come and get me.

The grey cabled scarf was perfect for February March (blue/grey/white). As are my Feather and Fan socks - long languishing, I managed to finish up the first one this weekend, while waiting for my yarn to finish Hourglass. 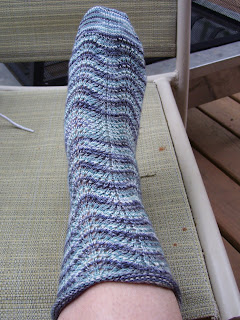 I wasn't overly fond of the tencel yarn (and I'm still not, though this sock will have a mate). It seems to stick to my needles - perhaps it is because they are bamboo? It also caused some wrist pain, especially in the heel flap/gusset area of the sock. The tencel causes the yarn not to have a lot of "give," so I found it especially difficult to k2tog, and feared every time that I was going to snap a needle. That said, this sock is very cozy and soft.

I also started a pink knit, out of the RYC Luxury Cotton DK that the lovely Ruth sent as a contest winning. It was all set up to be the Razor Cami, in an effort to maximize the yardage and not have to buy more yarn. However, I have since discovered that my LYS carries this yarn, and let's face it - I'm not much for camis in public (all that action in the love handle department and all), so it will be ripped and reknit into something else. I'm considering Glee, though Lolly recently had trouble with hers. It's such a cute pattern, and this is such wonderful yarn, that I'm hoping the pairing will work out. What do you think? Any other summer tops that this might look better in?

In other PS news, both my new project bag and my new project fit right into the new colors of pink/green/yellow. The color I'm using for the Surplice Lace top is Curcuma, which is a green shade. The yarn is lovely, and I'm enjoying the pattern. Photos soon!

Thank you for all the sweet comments on Hourglass. I do really recommend the pattern and the yarn. Now if I could just figure out a new "fo" pose - that one is getting really old!
Posted by Jenn at 8:26 PM